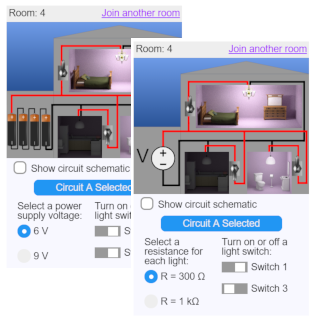 Students working in two different ILSs share a simulation of a dollhouse which has been wired with LED lamps and switches to permit lighting various miniature rooms. In one version of the lab, a student controls the power supply voltage whereas, in the other version, a student controls the resistance of each LED lamp. Both students can explore three possible electrical circuit configurations:

1) Circuit A - the lamps are wired in parallel.

The teacher should present students with the task of investigating each configuration and have them choose which one is best, as well as have students explain why the other two configurations are not optimal. The criteria for “best” can be that rooms are not lit too dimly nor too brightly and that turning a switch on or off only affects the room it was intended for. When students select a configuration to investigate, the voltage and resistance are set to default values, which initially suggests that the parallel circuit configuration (i.e. Circuit A) is not optimal. The students must collaborate to explore different combinations of variables (e.g., 6 V and 300 Ω for Circuit A) to identify that the parallel configuration of lamps is actually the best. Afterward, during a discussion, the teacher may also point out that Circuit C is non-ideal because even when all lamps are turned off the circuit consumes power.

2.) Because two versions of the lab are created, you should delete one of them and rename your ILS appropriately (e.g., Dollhouse Lab - Version A). Then return to the Collaborative Dollhouse Electricity Lab page at Golabz and click again the button "Create Space". This will create another new ILS with the two versions of the simulation. Simply delete the version of the lab for which you already have an ILS of and rename the new ILS appropriately (e.g., Dollhouse Lab - Version B).

3.) The Collaborative Dollhouse Electricity Lab requires students to communicate, and if a teacher prefers them to communicate via text messaging, then a chat tool, such as the SpeakUP app, can be used. Alternatively students can communicate face-to-face by speaking to each other. Include the SpeakUP app preferably before the lab. To use the SpeakUP app, students are required to enter a common room number or create a room and share the number of the room with the other student(s). As a teacher, you can also create multiple room numbers using the SpeakUP app and assign them to students as you like. This will allow you to access their chat transcripts later to read how they communicated with each other. The Collaborative Dollhouse Electricity Lab starts by asking users to enter a chat room number (which users of the SpeakUP already have). As long as two users enter the same room number they will share the same simulation.