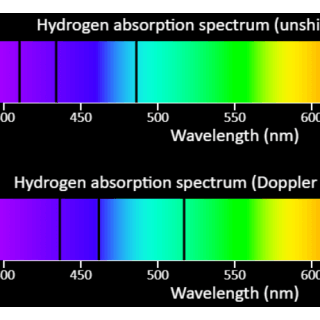 In this lab, you can explore the concept of the Doppler shift for electromagnetic waves. At the top is a simplified version of the emission spectrum from the Sun. You might expect the Sun to emit light of all wavelengths, but we actually see an absorption spectrum, seeing dark bands at wavelengths corresponding to emission lines from a hydrogen gas tube. This is because hydrogen atoms in the Sun actually absorb photons at those wavelengths, exciting their electrons to higher states.

Because the universe is expanding, most stars in the universe are moving away from us. This causes the wavelengths of light emitted by the star to increase - this is known as redshift. As you can see, for stars moving away from us the hydrogen absorption lines are shifted toward the red end of the spectrum, hence the name redshift. If a star is traveling toward us, the lines are blueshifted, as you can see for negative velocities.