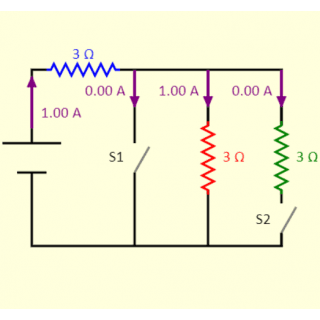 This lab shows power boxes for a circuit that can have resistors in series and parallel, depending on the switches.

The concept of power boxes was introduced in a September 2018 article in The Physics Teacher, by Daryl McPadden, Jason Dowd, and Eric Brewe, titled "Power Boxes: New Representation for Analyzing DC Circuits".

This lab shows the power boxes for a circuit with three resistors and two switches. When switch 1 is closed, that branch has zero resistance and all the current flows through switch 1, with no current going to resistor 2 or resistor 3. Things are more interesting when switch 1 is open. In this case, try setting all the resistors to the same resistance, and then predict what will happen when switch 3 is closed. In particular, predict what will happen to resistor 1 (the blue one).

Adjust the sliders, to see the impact on the power boxes of adjusting the battery voltage and the resistance of the resistors. In addition, use the buttons to open or close the switches.