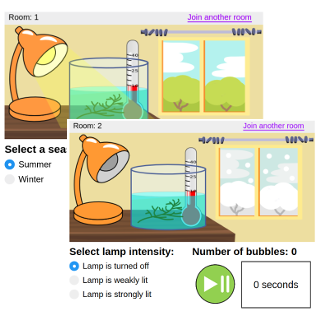 Students working at a distance in two different ILSs share a simulation similar to the Rate of Photosynthesis Lab, but are able to control only one of two variables (lamp intensity or the season of the year). Changes made in one version of the simulation are simultaneously shown in the other version. The season of the year variable is a distractor option. It does not influence the rate of photosynthesis because the aquarium plant is indoors and its water temperature does not change.

3.) The Collaborative Rate of Photosynthesis Lab is meant to be used together with a chat tool, such as the SpeakUP app, so that students can communicate with each other. Include the SpeakUP app preferably before the lab. To use the SpeakUP app, students are required to enter a common room number or create a room and share the number of the room with the other student(s). As a teacher you can also create multiple room numbers using the SpeakUP app and assign them to students as you like. This will allow you to access their chat transcripts later to read how they communicated with each other. The Collaborative Rate of Photosynthesis Lab starts by asking users to enter a chat room number (which users of the SpeakUP already have). As long as two users enter the same room number they will then share the same simulation. Please instruct your students in the ILS that they will not see the lab without a chat room number.

Used in these Spaces