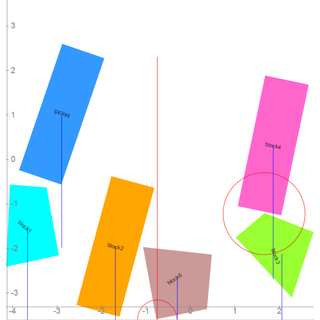 This simulation uses the 2D Rigid Body Physics Engine to show objects colliding and pushing against each other. It is based on the Rigid Body Collisions simulation, but it deals with steady contact forces where objects press against the floor, the wall or each other.

Try rearranging the blocks so they lean against each other at various angles, or stacking the blocks. You'll see that they are very slippery and hard to get to stack! This is because there is no contact friction in this simulation.

The contact forces are shown as red lines that appear at the corners of the objects. Contact forces come in pairs that are equal and opposite, but only one of each pair is shown here.