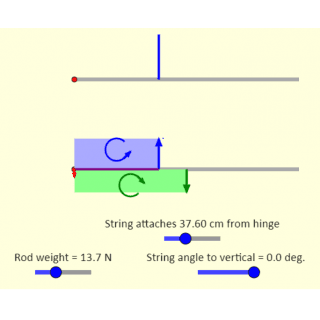 This is a lab of a hinged rod in static equilibrium. The top picture shows the rod, supported by a hinge (in red) at the left end and a blue string at some point along the rod. The second picture of the rod shows the extended free-body diagram of the rod, showing all the forces acting on the rod and where they are applied. The force of gravity is shown in green. The blue force (or force components) represents the tension, and the red force (or force components) represents the hinge force. We'll look at three equivalent ways to find the torque due to the tension.

You can use the sliders to control the position and angle of the string, as well as to set the weight of the rod.

There is also a checkbox that you can use to show an area representation of torque, the area having units of newton-meters. Taking the axis at the hinge, the torque from the force of gravity acting on the rod is shown in green and represented by the green rectangle. That torque is directed clockwise. This is offset by the counterclockwise torque from the string.

For method 1, the torque from the tension is calculated from the full torque equation, multiplying the tension force by the distance the force is along the rod from the hinge, multiplied by the sine of the angle between those two lines. The area representation shows a parallelogram.

For method 2, the tension is split into components, with the vertical component of the tension being responsible for the torque. The area representation shows a rectangle - it should be clear that the areas in methods 1 and 2 are the same.

For method 3, a lever arm is drawn, in purple, from the hinge to the line of the force, meeting the line of the force at 90 degrees. The area representation is again a rectangle, which tilts with the angle of the string. It is not as obvious that this rectangle has the same area as the areas of the shapes in methods 1 and 2, but it does - the same factors come into the calculation of the area.